Thrir is one of the oldest kingdoms on the continent and has always been ruled by Alfar. In that long history, the lands are forever overseen by three rulers to honour the gods' three creators and represent the balance of the world.

It is known as the most progressive kingdom in the known world as Queen Aynðilora strives to keep balance in all things and purposefully brings other species into court positions so that their people may be represented.

The most recent additions to their court were the Bakru, who were chosen from their nobility as they had been officially recognized as their own sovereignty amongst the kingdoms. An invitation was also given to chiefs of Oerco tribes, but each declined the elven ways. With the growing communities of Lares, she reached out to collect a few of them to be on her court as well.

During a recent war in the west, King Hubrys died. The High Queen Aynðilora and Crowned Royal Zanðre will speak with their council in discussion as to who his successor will be.

Heraldry in the Kingdom. 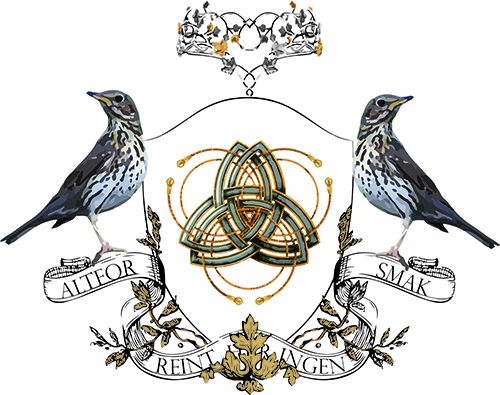 It is of Alfar laws that enable all citizens and families to assume their own coats of arms to distinguish themselves if battle should arise.

Noble coronets are in principle for the nobility only. There are specific coronets for counts, barons, and untitled nobles. In addition, the Svefnmåltrost ("Sleeping SongThrush"), which is the surname given to the illegitimate royal descendants, also have an exclusive coronet.

Individuals who take on a coat of arms, generally, take their family shield and colours while changing the other shield elements. This implies their family ties while giving the singular their own identity in battle or society.

Other terrortories, controlled by other races, might not follow the Alfar ideal of individual symbols, instead allowing only nobles, knights, or houses to distinguish and mark their tennents.

Siofra and Demis are considered not their own races. Though a few Siofra are Ladies-in-Waiting.


Saiwa
[meaning three columns of light in meditation]
Pachaq
[worldly]
Atipakux
A Uqhu-Apaec or 'Swamp' Apaec in the human vernacular. Atipakux is the most stubborn of the three. They were by no means born into nobility and was picked for that reason in partiuclar.


Holmes of the Holly
Younger sibling of Briot
Briot of the Holly
Older sibling to Holmes
Percy Stonefruit of the Persica
While presenting with a full name, it is likely not actually their name as they have mentioned many times that it 'sounds very human, don't you think?'